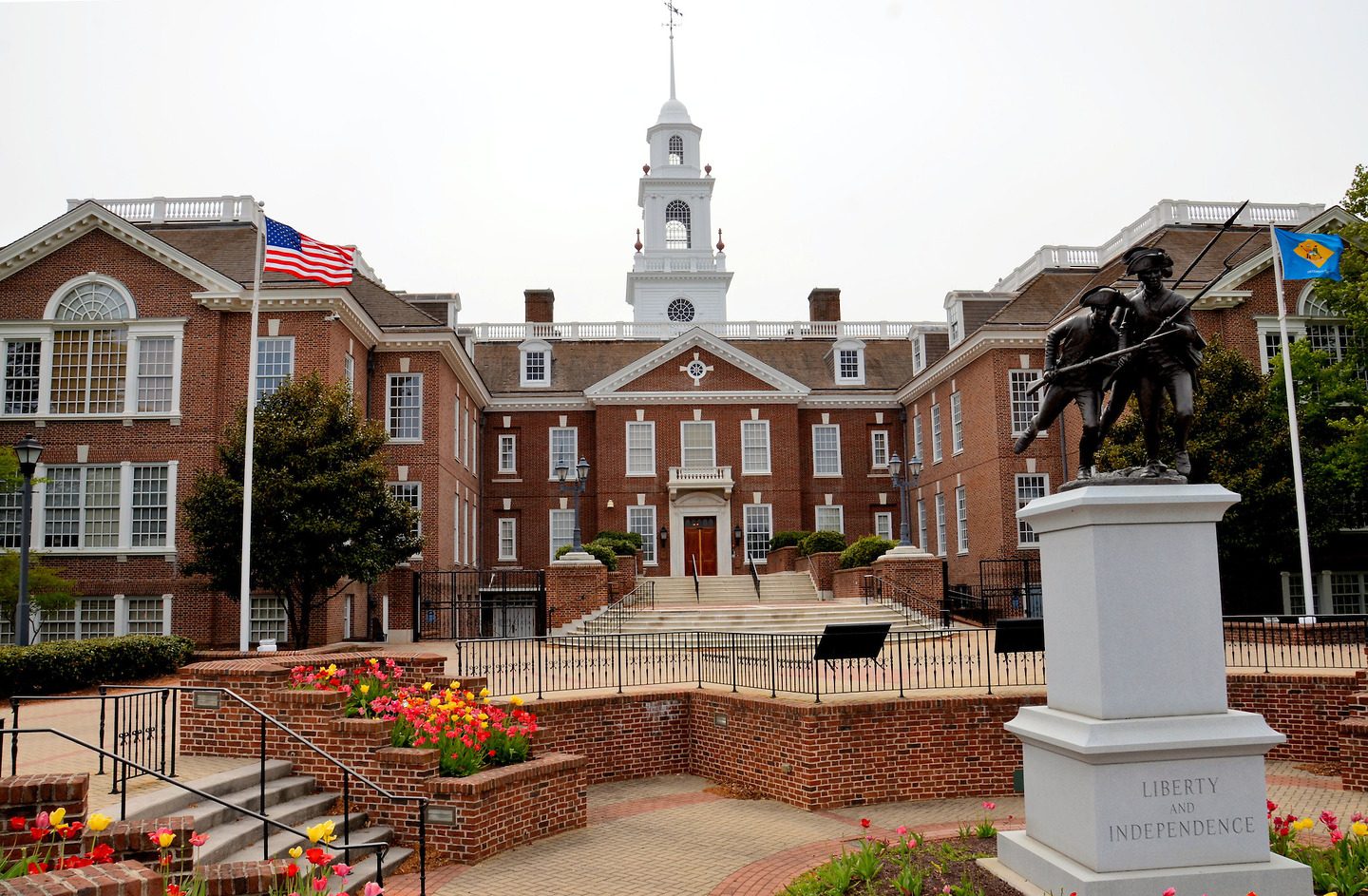 Background
The Second Session of the 151st General Assembly has been the busiest for the business community in recent memory. A combination of substantial turnover in legislative seats since 2018 and pent-up demand as we emerge from the COVID-19 emergency has led to a high volume of legislation. Another factor is the coming election. All 62 seats are on the ballot in November as it is the first election following the decennial census and redistricting. For comprehensive description of the following items, or should you have any questions or concerns regarding legislation, contact Joe Fitzgerald at (302)294-2060 or fitzgeraldj@ncccc.com.

The General Assembly is on a two-week budget markup break and will return to regular session on Tuesday, June 7.

At the May 16 meeting of the Delaware Economic and Financial Advisory Council, revenue forecasts increased by $184 million. Based on current projections, there is $6.48 billion available to appropriate for FY 2023, which begins on July 1, 2022.

The Governor’s Recommended Budget allocates $4.991 billion for the operating budget, $1.184 billion for the capital budget, and 56.9 million for the grant-in-aid budget and $215.9 million for a one-time supplemental spending bill. Governor Carney is also recommending that $15.2 million be set aside in the Budget Stabilization Fund (current balance = $302.5 million).


Data Broker Legislation HB 262 w/ HA 1 and HA 2 (Griffiths):
https://legis.delaware.gov/BillDetail?LegislationId=79022
This bill would impose registration, fee and data privacy requirements on companies and nonprofits which collect data on 500 or more Delaware customers/consumers/clients and license or sell it to a third party.
Chamber Position: seeking amendments in the Senate. 2 amendments successfully sought in the House.  Status: Passed House and assigned to Senate Business, Banking & Insurance Committee

HB 371 is legislation which would legalize the possession of marijuana in quantities of one ounce or less passed the Senate on May 12 by a vote of 13-7, with 1 absent.  Public consumption or possession of more than one ounce would still be an unclassified misdemeanor.

Marijuana Control Act, HB 372 (Osienski):
https://legis.delaware.gov/BillDetail?LegislationId=99298.
The companion bill, House Bill 372, would create a tax and regulatory structure for marijuana similar to that for alcohol. The sponsor placed House Amendment 1 with the bill. The amendment includes language that the NCC Chamber supports, clarifying that employers may prohibit marijuana use as a condition of employment.

Chamber Position: neutral on the bill, supportive of HA 1. Status: Defeated in the House 23-15, 1 not voting, 2 absent. It may be restored and voted on again. The sponsor voted “no” which under House rules makes it possible for him to make a motion to rescind the roll call and reconsider the bill.

This legislation would prohibit retailers from refusing to accept cash for in-person retail transactions.

Paid family and medical leave legislation, sponsored by Senator Sarah McBride (D-Wilmington), has passed both houses of the General Assembly and awaits signature by the governor. Governor Carney mentioned the bill in his January State of the State Address and has committed to signing the legislation.


Chamber Position:  Opposed the bill.          Status: Passed both houses, signed by the Governor.

SB 35 would create a new definition of “independent contractor” in Chapter 11 of Title 19 of the Delaware Code (Labor). It would also levy civil and criminal penalties for violations. The bill is problematic.

This legislation seeks to clarify that an employer is liable for liquidated damages if the employer does not make wages available on the next payday after the end of employment. There is disagreement among employment law practitioners about the effect of the bill.

This bill would require private and public employers in the State to give any employee who is a resident of Delaware and scheduled to work at least 7.5 hours on an election day 2 hours of paid leave in order for the employee to exercise the right to vote in person.

Representative Eric Morrison (D-Glasgow) is considering introducing legislation which would require all employers in the State to provide employees with a minimum of 1 hour of paid sick time and safety leave for every 30 hours worked.
Chamber Position: Opposed     Status: House Economic Development, Banking, Insurance & Commerce Committee

Delaware EARNS Act, House Bill 205 w/ HA 3 (Lambert):
https://legis.delaware.gov/BillDetail?LegislationId=78751
This legislation would create a state-administered retirement savings program to which employees, regardless of sector, could contribute via payroll deductions. It would als0 create a board to administer the program.
Chamber Position: Opposed     Status: Passed the House on May 17 (35-5, 1 absent). Currently assigned to Senate Labor Committee.


Professional Licensing/Criminal History, HB 404 (Minor-Brown):
https://legis.delaware.gov/BillDetail?LegislationId=109443
The bill identifies certain kinds of criminal history elements that should not be considered by licensing boards: charges that are not pending and did not lead to a conviction; juvenile records; records that have been expunged, sealed, or pardoned; and convictions that are more than 10 years old. An exception is allowed to the 10-year rule to preserve existing prohibitions involving sex offense convictions. The Act also identifies factors a licensing authority should consider in determining whether a criminal history record would prohibit licensure, or whether a waiver should be granted. The bill provides a process whereby an individual may submit an inquiry to the Division of Professional Regulation regarding whether their criminal history would be disqualifying for a particular license. Finally, it provides that the Board or Division must provide a written statement to an individual if their criminal history record would be disqualifying and allow the individual to submit rebuttal materials if they wish to do so.
Chamber Position: Under Review     Status: Released from House Sunset (Policy Analysis & Government Accountability) Committee on May 10, On House Ready List


City of Wilmington Predictive Scheduling Ordinance
Wilmington City Councilmember Shane Darby has introduced legislation which would require retail, hospitality, and food service establishments with 250 or more employees to provide advance notice of their work schedules, compensation for late changes to their schedules, rest between shifts, and first-right of refusal for additional work shifts.

This legislation would serve as the first leg of an amendment to Delaware’s Constitution which would create an “inherent, indefeasible and inalienable right to a clean and healthy environment, including water, air, soil, flora, fauna, ecosystems and climate, and to the preservation of the natural, cultural, scenic and healthful qualities of the environment.”

Pennsylvania has a similar amendment in their constitution which the Pennsylvania Supreme Court has interpreted as having direct bearing on industry as well as development.

The bill would create new regulatory requirements for residential construction as it relates to school capacity.

Currently, state code requires all school districts to match state- appropriated minor improvement funds with 40% local funds, regardless of a district’s ability to do so. This bill changes the requirements for the school district match for minor capital improvement funds to use the more equitable formula in place for major school construction projects.


This bill would exempt projects located in Investment Level 1 or 2 areas under the Strategies for State Policies and Spending that are consistent with local zoning and any local comprehensive plan, which will create full-time jobs from the pre-application process


On Tuesday, May 3, the Chamber offered testimony on Ordinance #22-024 which would incorporate updates to the New Castle County Comprehensive Development Plan based on the updates in the draft document.