Delaware General Assembly Back in Session, Budget Issues and Control of the Senate are Front and Center

The 149th General Assembly commenced on Tuesday, January 10.  Legislative session began with the swearing-in of newly elected and re-elected members of the House and Senate.  Most of the action was ceremonial and procedural (adoption of the House and Senate rules, appointment of certain officers, etc.). On January 12, the outgoing Markell Administration released their final recommended budget. While it is balanced, based on the most recent revenue projections, there is a considerable likelihood that the final budget package that comes before the House and Senate in late June will differ substantially from the initial recommended budget (House Bill 25).  There are a number of elements in Governor Markell’s budget which will face strong opposition on both sides of the aisle. 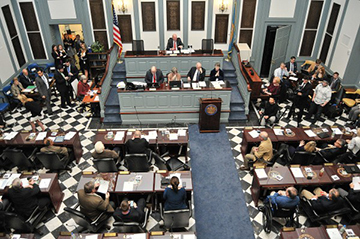 Tax and fee increase proposals will be more difficult to enact for the incoming administration.  Any tax or fee increase requires a three-fifths vote, per the Delaware Constitution.  In the House, where such measures must originate, that amounts to 25 votes; in the Senate it equates to 13 votes.   The House is composed of 25 Democrats and 16 Republicans; therefore such measures would require either a straight party-line vote, or Republican votes to make up the difference.  In the Senate, where there are currently 10 Democrats, 10 Republicans and 1 vacancy, it is a more complicated question.  Should the Democrats retain the majority in the upcoming special election, they will still need at least two votes from the Republican Caucus (assuming that all 11 Democrats vote in favor).  In the event that the Republicans prevail in the special election, it will be a matter of convincing key committee chairs and membership to vote the measures out of committee; and then an issue of getting the necessary votes on the floor.  Either way, the Senate Republicans will enjoy more leverage in the budget process than they have in decades.  It is leverage that they will likely use to press their fiscal agenda.

Leadership and Composition of the 149th General Assembly
Leadership in the Senate is as follows:

Leadership in the House is as follows:

Governor’s Cabinet in Place
The following nominees for the cabinet have been confirmed by the State Senate during the month of January:

Two keep cabinet posts have yet to be confirmed.  Consideration of the nomination of Shawn Garvin for Secretary of the Department of Natural Resources and Environmental Control has been deferred to after the budget mark-up break (March).  Additionally, Governor Carney has indicated that he will wait to name a new Director of the Delaware Economic Development Office (DEDO) until after a working group which will be developing a plan to restructure the agency has completed its work.
Governor Carney’s first executive order, Executive Order Number One, creates a working group to study DEDO and make recommendations to modernize the agency and its approach to economic development.  A report from the group is due in April.

Special Election to Determine Senate Majority
The leadership roster may change somewhat between now and the beginning of March.  Due to the election of Bethany Hall-Long as lieutenant governor, her Senate seat in the 10th District has become open.  A special election will be held to fill the seat in late February.  The current composition of the State Senate is 10 Democrats, 10 Republicans and 1 vacancy.  Therefore, the majority is on the line.  At present, the Democrats still have a working majority given the fact that they held an 11-10 majority at the beginning of session when the Senate was organized.  In the event of a tie vote on a measure, the lieutenant governor would cast the deciding vote.

The last time that the Republicans held the majority, it was 1972.  Two senators, J. Donald Isaacs and Anthony Ciccone, switched sides and tipped the majority to the Democrats and put in place a majority that has lasted for nearly 45 years.  Joining the Senate this year, so far, are two new members, one Democrat and one Republican.  The Democrat, Jack Walsh (D-Montclare) replaces Senator Karen Peterson, who retired at the end of her term.  The Republican, Anthony Delcollo, defeated the sitting Senate President Pro Tem, Patricia Blevins in November.

Running in the special election are former New Castle County Council President Stephanie Hansen (Democrat), John Marino (Republican), and Joseph Lazendorfer (Libertarian).  The registration in the district would indicate a substantial Democratic advantage at first glance.  As of November 2016 there were 15,854 Democrats, 9.925 Republicans and 9,183 Independents.  However, Mr. Marino outperformed expectations on his last run for that Senate seat in 2014, garnering 49 percent of the vote.  This promises to be a spirited and very costly election.  Estimates run as high as $500,000 and more.

The House continues to be comprised of 25 Democrats and 16 Republicans.  There was one new member elected in November, Charles Postles (R-Milford).

Issues
Abandoned Property:  The first substantive bill of interest to the business community for this session has passed both houses.  Senate Bill 13, sponsored by Senator Bryan Townsend and Representative Bryon Short, seeks to addressed concerns that came to light following Judge Gregory Sleet’s ruling on Delaware’s escheat program practices in the Temple Inland case.  Judge Sleet stated explicitly that the methods employed by the State of Delaware in their abandoned property audit and recovery program “shock the conscience”.

In 2014, Temple Inland, a subsidiary of International Paper, brought an action against the State of Delaware in federal court challenging the State of Delaware’s audit and estimation practices in the area of abandoned property.   In their filing, Temple Inland raised five distinct constitutional issues.  The plaintiff initially filed for summary judgement, the State of Delaware filed a motion to dismiss.  Judge Sue Robinson responded with a memorandum opinion in 2015 which denied both motions but left the constitutional questions open for review.   In a June 2016 ruling, Judge Gregory Sleet of the United States District Court for the District of Delaware, issued a fairly sharp rebuke to the State:

In its summary, the court cited several “troubling” actions by the State of Delaware: an audit conducted 22 years after the report’s due date, exploitation of the statute of limitations, failure to notify holders regarding the need to maintain unclaimed property records indefinitely, failure to articulate any legitimate state interest in retroactively applying Section 1155, and arbitrary estimation techniques. In spite of the court’s powerful rebuke, Delaware will most likely appeal.  (http://www.bakertilly.com/insights/temple-inland-v-cook-latest-decision-in-delaware-unclaimed-property-case-l)

Business organizations, including the New Castle County Chamber of Commerce, state officials for years that the audit and estimation methods employed by the State of Delaware and contractual agents of the State were exceedingly aggressive, were alienating our corporate citizens and would eventually be challenged.  In total, the State of Delaware stands to lose about $250 million in annual revenue.
There is general agreement among members of the business community that the legislation is a good first step, but that additional changes to Delaware’s abandoned property statute would be necessary in the very near future.  We are currently studying the legislation and consulting with affected businesses as well as the sponsors of the legislation to assess what next steps are advisable.

Minimum Wage
In what has become a perennial occurrence, Senator Bob Marshall (D-Wilmington) has introduced minimum wage legislation.   Senate Bill 10 would increase the minimum wage by 50 cents per year, beginning in 2017 and ending in 2020, which would bring the minimum wage to $10.10 per hour at that point.  The bill would also tie in a COLA (cost of living increase) tied to Social Security Administration COLA adjustments.

The legislation is currently in the Senate Labor and Industrial Relations Committee.  The Chamber opposes this legislation.  Of particular concern is the automatic cost of living adjustment.  A policy decision to increase labor costs for employers