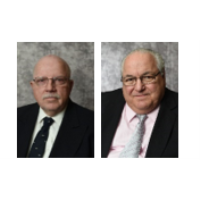 Sun East President and CEO Michael J. Kaczenski expressed his deepest gratitude for the numerous contributions made by both Directors, “On behalf of the board, the staff, and the members of Sun East, I want to thank both George and John for their decades of service; they have shepherded this credit union through many years of unprecedented growth and innovation, while always putting the interest of our members first. It’s because of their passion and support for the credit union philosophy of people helping people that we’ve been able to have such a huge impact on the financial well-being of our members, our employees, and our communities. I wish them both much success in all future endeavors, and I’m proud to have served under their leadership.”

In light of Mr. King’s and Mr. Rim’s retirement; Kaczenski went on to say, “Part of the Board’s role in governing the credit union is developing a solid succession plan, and we’re fortunate that our Board helped build that depth of talent through our Supervisory Committee. Therefore, the Board of director positions vacated through Mr. King’s and Mr. Rim’s retirement will be filled by Eugene Roelofs and Richard Lauria, both of whom previously served on our Supervisory Committee. They have a genuine understanding of how to govern and support our member-focused culture while being flexible enough to respect varying viewpoints from their colleagues. This change is effective immediately, and I have no doubt that both newly appointed board members will contribute to our continued success.”

Sun East Federal Credit Union, founded in 1949, is a full-service, not-for-profit financial institution serving the savings, borrowing, and virtual banking needs of nearly 52,000 members, 1,250 employers, and multiple other organizations in Pennsylvania, Delaware, Maryland and New Jersey. Sun East has over $735 million in assets with branches throughout the Quad-State area, nationwide ATM access, and online and mobile banking. For more information, call 877- 5-SUNEAST or visit www.suneast.org.