Newark, Del., September 6, 2022, Landmark Science & Engineering won the Conceptor Award at ACEC Delaware’s Engineering Excellence Awards ceremony at the 2022 Engineer Week Banquet held this year. The Conceptor Award is the second highest award presented and was for the category for projects in the over $5 million cost category. Landmark’s Joseph C. Marvasi was also recognized as a new Professional Engineer by the Delaware Association of Professional Engineers (DAPE) at this rescheduled banquet held on June 16, 2022.

Delaware’s first public K-12 school, Fairview Campus, located in the fast-growing Middletown-Odessa-Townsend area, was recognized as a school model that set new standards for school development. With the civil engineering site design of unique, low-impact stormwater elements, combined with shared building components and site infrastructure, the 272-acres of farmland – a large tract of prime land – was able to remain intact and meet all of the community’s educational needs in one campus setting, rather than on four separate school sites with many costly redundancies. It is also possible that less overall land will ultimately be removed from the public tax rolls by consolidating the four schools on one site.

In addition to the design of low-impact stormwater facilities, approval of parking variances allowed for shared vehicle parking and bus loading area that eliminated about 1,000 parking spaces – or 10 acres – of impervious parking surfaces. This helped with greening of the site, maintaining more natural habitat, improving water quality, and saving construction costs, as well as operating and maintenance costs that the school district will realize for many years to come.

All classroom buildings were designed with frontage around a central green, with an inner loop road for parent drop-off of students that is segregated from bus, staff, and student parking by directing those vehicles to an outer loop road. Vehicle access to the separated loop roads is via a single, dual lane entrance/exit boulevard and roundabout. Activity centers, such as the performing arts center, gymnasium, and sports complex with tennis courts, track and field, athletic fields, and stadium, are all situated with direct access to the outer loop.

The 4,000-student, 571,000 square foot campus was designed for completion in two phases to meet the vision and needs of the District, while minimizing development costs.  The first phase of the campus (K-5) opened in August 2012 with completion of site infrastructure, entrance, four-lane boulevard and roundabout, and the first two schools: Spring Meadow Early Childhood Center and Old State Elementary.

The second phase of the campus was completed in September 2020, allowing sixth and ninth graders to start in Cantwell’s Bridge Middle and Odessa High, respectively, with the plan to add one grade per year. This sequencing allowed the middle school to host Silver Lake Elementary students in 2020 while their school expansion was being completed, and the high school to host Everett Meredith Middle students in 2021 until their school reconstruction is complete in 2022. The middle and high school buildings are connected with major shared building components, including a big box performing arts center, to create one continuous and unified facility. The site features an Ag building and attached greenhouse with a fenced animal area. The athletic facilities comprise six tennis courts, a 10-field sports complex with a combination of natural turf fields, with irrigation hydrants, two synthetic turf football/soccer fields, a rubberized 8-lane track, and a field house and stadium with LED lighting and fencing.

Clustering the buildings around a central campus allowed utilities, such as sewer, water, etc., to be installed via central trunks from a single source, creating additional infrastructure cost savings. The project needed only one water meter pit rather than four, saving $90,000, three fewer connections to the water system saved $50,000, and three fewer sewer connections saved $20,000. Three fewer vehicular entrances onto a public road saved $450,000 and reduction of 10 acres of paving saved +$5,000,000. Similar financial benefits occurred with every other element of the infrastructure and shared school facilities. Economies of scale also played a role in savings. Long-term operating and maintenance costs savings of the stormwater management and other facilities will be realized, and bus routes are consolidated, shortening routes. 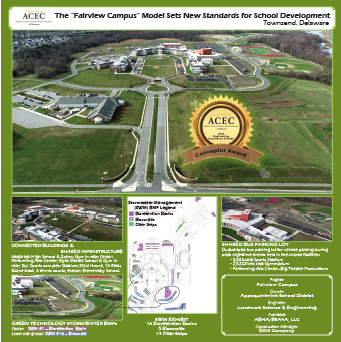 Landmark Science & Engineering is an award-winning consulting firm, started over 35 years ago in 1987 as Landmark Engineering, Inc. The firm is one of the regions’ largest and most diverse, integrated civil engineering and environmental science consulting firms, providing professional services across the disciplines of site/civil, water resources and environmental engineering and sciences, and land surveying. Environmental sciences include ecological (wetlands, forest, habitat) and site remediation/brownfields. The firm of 30 serves clients in the DE, MD, and PA region from its headquarters in Newark, Delaware and branch office in Aberdeen, Maryland.  www.landmark-se.com